On 14 March 2019, the ExoMars CaSSIS (Colour and Stereo Surface Imaging System) team released new images from Mars. The camera system was developed at the University of Bern by an international team led by  Prof. Nicolas Thomas  and,since April 2018, it delivers high-resolution color images and digital terrain models of Mars. The images were produced by teams from the University of Bern, University of Arizona and the Observatory of Padova of the Italian National Institute for Astrophysics (INAF). These high-resolution images shows peculiar features of the surface of Mars, even in 3D, and highlight the mineralogic variety of the surface (click on the images to find more specific informations). 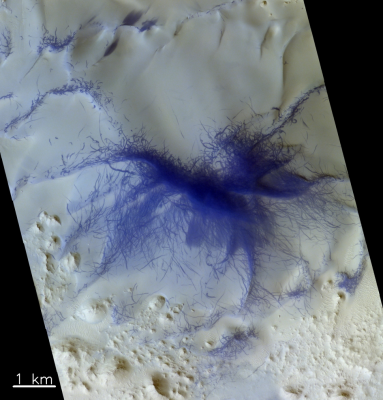 This image shows dark patterns generated by the passage of the so called "Dust Devils" as seen by the Colour and Stereo Surface Imaging system (CaSSIS) onboard the ESA-Roscosmos ExoMars Trace Gas Orbiter. Dust Devils are small martian tornadoes, which remove the surface material (which appear white-yellowish in this colour composite image) exposing the underlying, darker material. 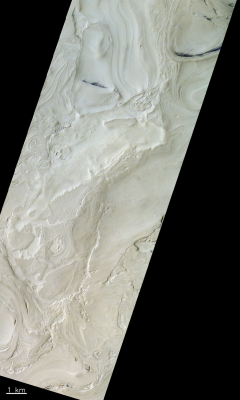 This image shows the so called "banded terrain". This martian landform is pecluriat to the Hellas Basin, the region of Mars which contains the lowest lying surface (up to 7 km below the zero level).

The terrain gives the impression that bands of material are flowing downhill. In addition to the banded terrain, dark streaks generated by dust erosion are present.

The image was taken by the Colour and Stereo Surface Imaging System (CaSSIS) onboard the ESA-Roscosmos ExoMars Trace Gas Orbiter on 12 December 2018. It is centred at 39.04ºS/53.9ºE. 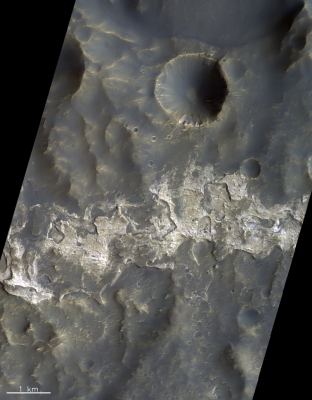 This image shows a region of the 100 km-wide Columbus Crater, located in the southern hemisphere of Mars.

Layered rocks that appear in light-tones are found extensively on the northern crater walls, terraces and floor.

Spectral information from the CRISM spectrometer, onboard NASA’s Mars Reconnaissance Orbiter, has already revealed that these layers are rich in hydrated minerals, such as sulphate salts that appear to cover the white-coloured rocks.

These salts have been deposited by lakes in the past martian history. When these lakes dried, through evaporation they deposited specific minerals turn by turn. The least soluble precipitated first, and the most soluble later. As a result, martian paleolakes leaved a layered sequence of salts which testify their existence in the past martian history.

The image was taken by the Colour and Stereo Surface Imaging System (CaSSIS) onboard the ESA-Roscosmos ExoMars Trace Gas Orbiter on 15 January 2019. The image is centred at 28.79ºS/193.84ºE. North is up. 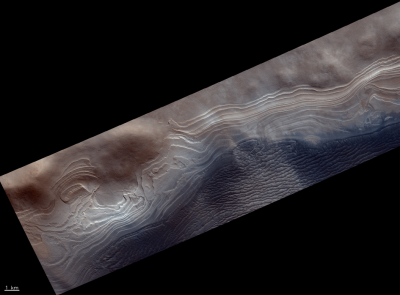 The image was taken on 16 December 2018 by the Colour and Stereo Surface Imaging System (CaSSIS) onboard the ESA-Roscosmos ExoMars Trace Gas Orbiter and captures a strip of the surface measuring about 25 km x 9 km, located at the edge of a layered mound in Burroughs crater, Mars. It is located 200 km to the northwest of the northernmost edge of the southern polar ice cap.

The ice caps are made of layers upon layers of ice and dust that record how the climate of Mars evolved form the past to now.
Many craters surrounding these caps present layered mounds, especially in the North, some being composed of nearly pure water ice.
Layered mounds like the one in this image is located close to the southern cap, and may represent remnants of ice deposits from past climates, in which the polar caps were more extended. Otherwise, they may have been deposited independently, thus pertaining to another moment of the martian history.

Thanks to the stereo capabilities of the CaSSIS instrument and the resulting Digital Terrain Models, these layers can be analyzed in great detail. 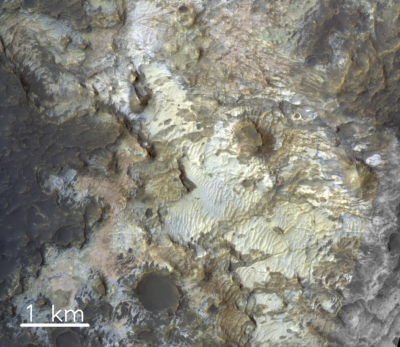 This image shows the floor of Kibuye crater on Mars, in the region of Terra Sirenum. The various tints are related to the rich variety of minerals contained in the rocks.

In the past, infrared spectrometers orbiting around Mars detected chloride salt and clay minerals in this region. CaSSIS colour-composite images processed like this one helps scientist to improve the mapping of Mars mineralogy. In this region, for example, there is strong evidence for sustained weathering of the rocks by water and possible ancient lakes.

Such colour-composite images shows the extraordinary sensitivity of CaSSIS to the mineralogical composition of the rocks.

The image was taken by the Colour and Stereo Surface Imaging System (CaSSIS) onboard the ESA-Roscosmos ExoMars Trace Gas Orbiter on 15 December 2018 and it is centred at 29.1°S/178.2°E.

This image was taken by the Colour and Stereo Surface Imaging System (CaSSIS) onboard the ESA-Roscosmos ExoMars Trace Gas Orbiter on 18 November 2018.

The most important feature is a well-preserved 4 km-wide crater near the Hellas basin region of Mars.

The colour capability of CaSSIS reveals exposures of light-toned bedrock, which may be associated with the formation of some of the most ancient rocks of the Hellas basin – between 3.7 and 4.1 billion years ago. Many exposures of this terrain show evidence of chemical alteration operated by water. 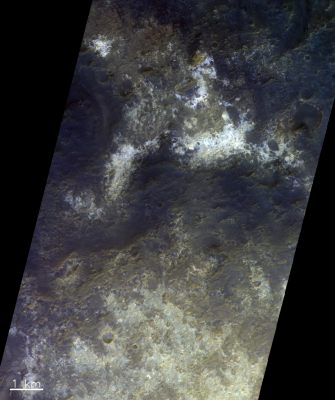 This colourful image pictures terrain south of the Mawrth Vallis outflow channel on Mars, and shows mineralogical variety of this region.

Mawrth Vallis is an outflow channel which dissects the ancient highlands of Mars and goes into the low-lying northern plains. Some of the bedrock exposed in the outflow channel belongs to the most ancient rocks found at the surface of Mars and testify the strong water activity during the past history of Mars.

Use red-blue stereo ‘3D’ glasses to view this image of circular depressions in the southern hemisphere of Mars, near the northern rim of the Hellas basin.

3D data and colour information of the layered outcrops like those in this image are essential for understanding their formation process.

The image was created from a stereo pair taken by the Colour and Stereo Surface Imaging System (CaSSIS) onboard the ESA-Roscosmos ExoMars Trace Gas Orbiter on 22 December 2018. The image is aligned from left to right along the ground-track of the spacecraft, and is centred at 29.2ºS/66.8ºE.

Use red-blue stereo ‘3D’ glasses to best view these dust dunes at the edge of Green Crater, Mars.

Dunes on Mars are dynamic features, which can move at speeds up to 5 m per martian year. Dust devil streaks –blue in this colour-composite representation – are seen on the interior wall of the crater. The different colours indicate the range of surface composition both inside and outside the crater.

The image was created from a stereo pair taken by the Colour and Stereo Surface Imaging System (CaSSIS) onboard the ESA-Roscosmos ExoMars Trace Gas Orbiter on 10 December 2018. The image is aligned from left to right along the ground-track of the spacecraft. It is centred at 59.92ºS/351.66ºE and measures about 7 km on the short side. 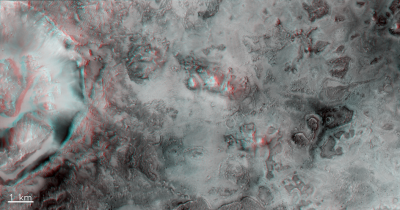 A portion of a crater (left) and rough terrain outside the crater at the boundary between the Syrtis and Isidis regions of Mars, south of the landing site foreseen for NASA’s Mars 2020 rover in Jezero Crater.

Use red-blue stereo ‘3D’ glasses to best enjoy this view. It was created from a stereo pair taken by the Colour and Stereo Surface Imaging System (CaSSIS) onboard the ESA-Roscosmos ExoMars Trace Gas Orbiter on 29 December 2018. The image is centred at 20.73ºN/79.27ºE and measures about 7 km on the short side.

To the left of the image, so-called ‘brain coral terrain’ is visible – so-named because of its likeness in appearance to the ridges on the surface of the human brain. It appears to sit on the floor of the largest crater, although this deposit may be related to the lineated fill that lines the floor of the 15-km crater to the right of the image. Both types of terrain are associated with ice-rich material found near the boundary between Mars’ northern plains and its southern highlands.

Information held in images like these – best viewed with red-blue ‘3D’ glasses to give the impression of depth – help scientists make a detailed study of the order in which the many interacting layers were formed, thus piecing together the history of complex regions.

The image was created from a stereo pair taken by the Colour and Stereo Surface Imaging System (CaSSIS) onboard the ESA-Roscosmos ExoMars Trace Gas Orbiter on 7 February 2019. It is centred at 32.9 ºN/13.7ºE.

This image shows a part of Tithonium Chasma, on the western side of the Vallis Marineris region – also known as the ‘Grand Canyon’ of Mars. The observed area is part of the Western Tithonium Dome. Rocky outcrops are seen at different elevations – best seen when viewed through red-blue stereo ‘3D’ glasses. The structures have been interpreted as the result of erosion – perhaps by flowing water. Bluer hues indicate dust.

The image was created from a stereo pair taken by the Colour and Stereo Surface Imaging System (CaSSIS) onboard the ESA-Roscosmos ExoMars Trace Gas Orbiter on 5 February 2019.

Besides high-resolution color images of the surface of Mars, the CaSSIS camera offers the possibility to acquire the so called stereo-pairs (i.e images of the same place taken with particular viewing conditions), which are essential to the generation of digital terrain models (DTMs). The latter are of pivotal importance for the quantitative analysis and interpretation of CaSSIS images.

The Digital Terrain Models have been generated through a stereo photogrammetric process implemented in the 3DPD software developed by the INAF-Padova. The DTMs have been created starting from the CaSSIS stereo pairs obtained from a mosaicking procedure able to combine the thirty framelets that typically define the stereo acquisition. The images and the derived 3D models have a pixel scale of 4.6 m that permits an high resolution feature analysis.

Two examples of such datasets are provided here: 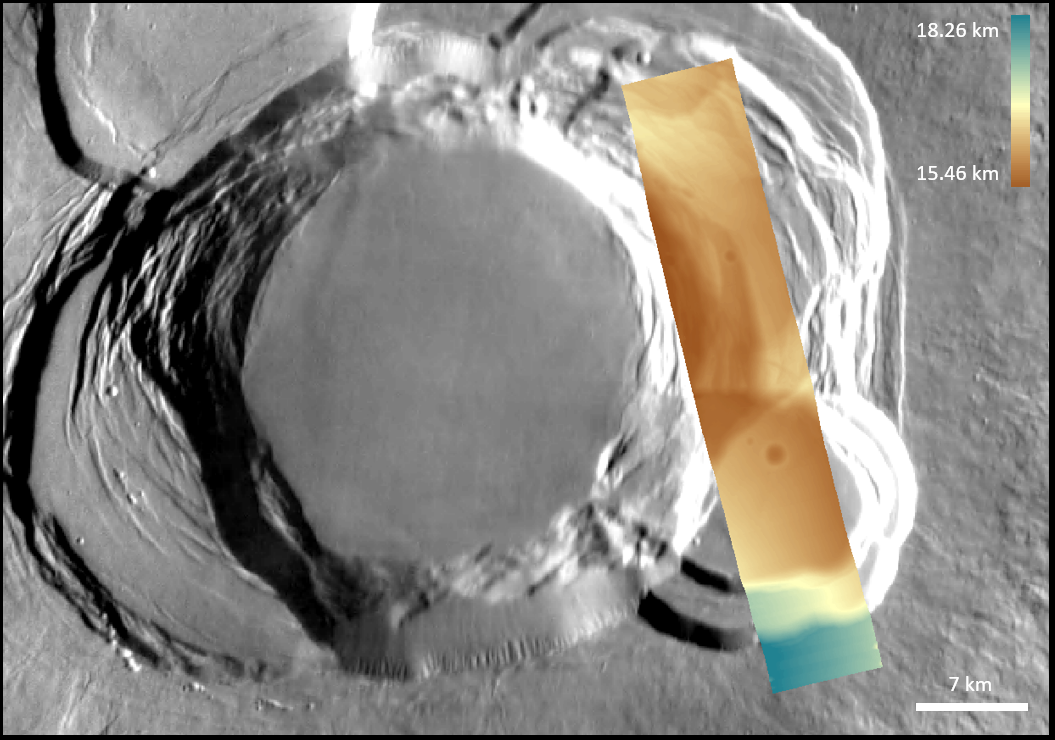 DTM obtained on the eastern side of the caldera of the Ascraeus Mons, a 480 km wide shield volcano belonging to the Tharsis Montes. This is the second highest peak on Mars, with a summit elevation of 18.1 km. Such volcano was built by several thousand basaltic lava flows. With the exception of it huge size, it is similar to terrestrial shield volcanoes like those forming the Hawaiian island. 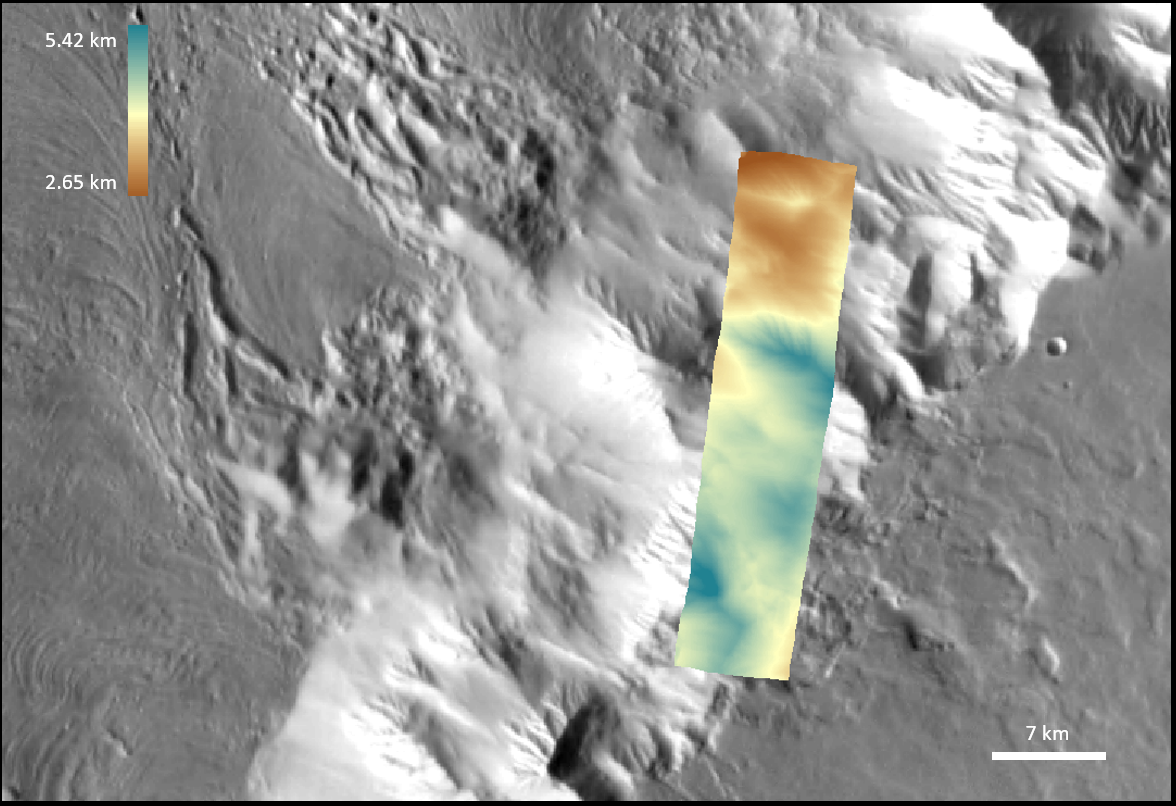 The north-western flanks of the Olympus Mons, the largest (600 km wide) and tallest (25 km) shield volcano on Mars. Such volcano formed during the Hesperian period, and it is located between the Tharsis and the Amazonis quadrangle, off the northwestern edge of the Tharsis bulge. The DTM is located in the volcano’s outer edge where an escarpment/cliff of about 8 km tall is present.